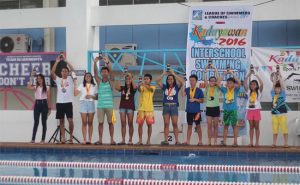 DAVAO. Awardees of the most outstanding swimmer award lift their trophies during the awarding rites of the Kadayawan 2016 Interschool Swimming competition at the Martinez Sports Complex of the Ateneo de Davao University (ADDU) Matina Campus last Sunday. (Photo by Antoinette Adle-Mendoza)

Addu scored a total of 503 over Davao Merchant Marine Academy (DMMA) and Stella Maris Academy Davao (Smad) who settled for runner-up honors instead.

DMMA averaged a total of 163 while Smad collected 161.

The highlight of the event was the ceremonial swim led by the 11 Sama Badjao swimmers of the Matina Aplaya Elementary school donning their tradition wooden goggles the “Tupara”.

The event was sponsored by the Sports Development-City Mayors Office headed by officer-in-charge Mikey Aportadera in cooperation with League of Swimmers and Coaches of Davao City headed by its chairperson, Ms. Antoinette Adle-Mendoza. The swimfest was organized as part of the 31st Kadayawan Festival activities.